Networking For Dummies is written especially for people who have this nagging feeling in the back of their minds that they should network their computers but haven’t had a clue about how to start or where to begin. So what are you waiting for? Let’s start getting into these fundamental terms to have a great kick-off.

What does networking mean for dummies?

Essentially, a network is made up of two or more computers that are linked together to share resources (such as printers and CDs), exchange files, or enable electronic communication. Computers on the network can be connected via cables, telephone lines, radio waves, satellites, or infrared light beams.

Here are common types of networks:

Computer networking was first linked between physical workstations, PCs, and desktops, either with an ethernet cable or later wireless. Each computer has its own physical hard drive. Its hard drive is often denoted by different drive letters on the interface of the workstation operating system and different types of software applications. Users can access a physical computer with their own drive, pull from the computer’s drive, or log into network software to access the drive of another computer in a different part of the room or the building.

In these initial setups, end-users typically chose access to a networked drive from a drop-down list, engineers used a specific network topology to link these workstation components together.

Circular, ring, bus, star, and tree topology are some common network structures used to allow individual computers to communicate with each other and share information. Computers are typically located in a specific building but can be networked between different rooms or offices.

Then the virtual network appeared along with other virtualized computing processes. This is true of remote networking, as the cloud and other innovations drive wide area network designs. 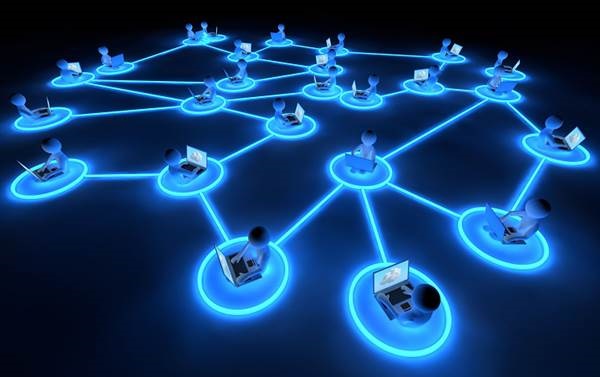 A network is made up of two or more computers that are linked together to share resources.

The network can be wired or wireless, with most networks a combination of the two. The following are some common fundamentals to know when discussing computer networking:

There are different ways network nodes can be connected to each other. This is usually not considered in small networks but as the network gets bigger, it becomes more important.

When designing networks and choosing connection protocols, it is important to have a good understanding of these topologies. Popular are:

The way nodes on the network communicate with each other can be very different from how they are physically interconnected.

For Example, the Web (WWW) is a client-server network.

Blockchain is a peer-to-peer network. In this type of topology, all nodes are equal, and any node can share data with any other node.

Blockchain is a peer-to-peer network.

Why computer networking is important

There are a number of reasons why networking is essential for a business, organization, or individual. These benefits include:

Cut down the costs

You can cut costs and allow the efficient use of resources. Hardware is the most expensive resource in technology. Computer networking significantly reduces your hardware costs.

Since computers are interconnected, resource consolidation is efficient. Printers, copiers, and spare stock were divided among the employees. This eliminates the need to purchase individual IT assets for each employee. Unlike traditional desktop computers, you need to install software regularly. Now you just need to install the updates and monitor the performance.

Computer networks aggregate all their data into a central data storage server. Your employees can access this data. You can use the data to gain a better understanding of how to increase your company’s productivity. With a central server, you reduce the number of servers and increase the efficiency of the activity.

Computer networks allow flexible operation. The data is not stored on a local server so it is accessible over the internet connection. You can access your data from any device. This enhances the freedom of movement while accessing your data wherever you are.

Computer networks are a huge boon to the media landscape. Network connectivity allows you to send and receive text messages and files in real-time. Information is available and is easily accessible from any device. You only need a reliable internet connection. Even if your device is off, you login from another device and access your data.