What is a node in networking?

In general, a node is a device or data point in a larger network. It can be a computer, a phone, or even a printer.

In a network, a node is a connector that can receive, create, store or send data along distributed network routes. Each network node has the ability to be programmed or designed to recognize, process, and forward traffic to other nodes.

The concept of network nodes was born with the use of distributed networks and packet switching. Depending on its application, the network nodes perform many different functions.

What are nodes in blockchain?

In order to carry out an operation, a blockchain relies on its nodes for their computing power. These operations and their complexity can vary. Each node is tasked with taking care of one of them. In a blockchain, all nodes are connected to each other and they constantly exchange the latest blockchain data with each other so all nodes stay up to date. They store, spread, and preserve the network data. How do nodes work?

When a miner tries to add a new block of transactions to the blockchain, nodes check if that block is valid. They can accept or reject it. When a node accepts a new block, it saves it and stores the transaction history on top of the remaining blocks it has already stored.

Some blockchains (e.g: TomoChain) feature Masternodes. Masternodes are heavier and may have additional powers compared to normal nodes. In addition to validating, saving, and broadcasting transactions, Masternodes sometimes also facilitate other events on the blockchain depending on their nature. These events include governing voting events, providing execution of protocol operations, and enforcing the laws of the according to the blockchain. 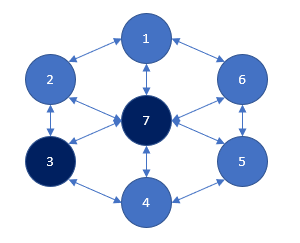 5 normal nodes and 2 Masternodes. Masternodes are heavier and may have additional powers on the blockchain.

Masternodes are generally always online (24/7), and facilitate much more memory than normal nodes. You could say a Masternode is like hosting a very large server on the network. Because hosting a Masternode usually requires much more resources (electricity, up-time, maintenance, storage space, memory), hosting one generally provides payment in the form of interest.

Who can run a Masternode?

In fact, not anyone can run a Masternode. The power of controlling a Masternode can be abused, and therefore it requires the host to deposit a minimum (often quite large) amount of crypto as collateral. This collateral is taken hostage when the Masternode host violates the rules of the blockchain. The interest rate a Masternode host receives is calculated over their collateral deposit.

In TomoChain, there is always a maximum of 150 Masternodes. Masternodes are able to create, verify, and validate new blocks one the TomoChain blockchain.

Where is blockchain data stored?

Blockchain does not store any of its information in central databases. Instead, its database is copied and spread across a network of computers. Whenever a new block is added to the blockchain, its data will be updated on all nodes to reflect the change. By spreading that information across the network, blockchain becomes more difficult to tamper with. If a single copy of the blockchain falls into the hands of a hacker, they can only compromise that one copy, not the entire network.

What is a block?

Blocks are files in which the data relating to a blockchain network is permanently recorded. A block records some or all of the most recent transactions that have not been entered into any previous block. Thus, a block is like a page of a ledger or notebook. Every time a block is ‘completed’, it gives way to the next block in the block chain. Therefore, a block is a permanent archive of records that, once written, cannot be changed or deleted.

Why is blockchain important?

With many practical applications for the technology already being implemented and explored, blockchain is finally making a name for itself at this stage. Blockchain can make business and government operations more accurate, efficient, and secure.